As I think back over my time as an intern with 2 Faiths, 1 Friendship (2F1F) I am reminded of why I wanted to be a part of this work. One of the things I am most passionate about is the importance of building peace between Muslim and Christian communities. The most essential element to building peace is friendship. Without friendship between Christians and Muslims, we cannot hope for there to be peace. I have known and believed this for years now. 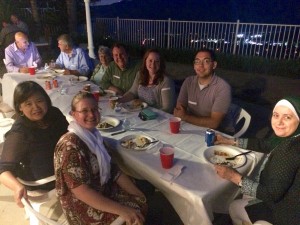 Cliff at one of the many dinners he helped organize.

However, until I interned with 2F1F, I found it extremely difficult to make Muslim friends. It wasn’t that I didn’t think it was important. I had attended mosques and attempted to get to know Muslims in my area. I had even attended several of the events that 2F1F organized in the Orange County area. But living in Pasadena, it was difficult to continue cultivating friendships after the event was over. Now, after ten weeks of helping 2F1F expand into Pasadena, I have attended a mixer, training 1, training 2, and a Ramadan dinner all with people who live in the same area. As more space is created for us to spend time together, I can see those friendships start to deepen and for peace to begin expanding between our communities.

It was incredible getting the chance to get to know people over several events and learning a little bit more of their story each time. Even when I didn’t get to meet people in person, I was able to interact with them via email while following up after events and organizing the Ramadan dinners. I also got to hear their stories after the dinners and how friendships were formed as a result. I remember after one dinner in particular, the country of origin of the family who hosted experienced a terrible attack the very next day. The next morning everyone who had attended the dinner reached out to the family to express their sadness at what had happened and to offer prayer. 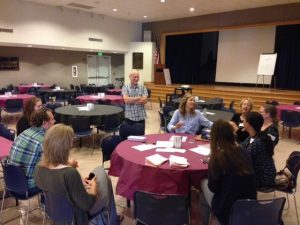 Experiences like these happen often and getting to see them unfold and be a part of facilitating them is an experience like no other. I wanted to intern with 2F1F because I believe in building friendship to facilitate peace. I learned more than I ever could have imagined. For anyone who wants to learn how to build friendships leading to peace, I highly recommend spending time with the team at 2F1F. They believe in what they do and they are truly friends with one-another. I got to spend time with all of them in the time before and after events and I can tell you that there is no group who has more fun or cares more for one-another. If you long to build friendships and peace between Muslims and Christians, then working with 2F1F will be an experience you will never forget!   – Cliff